You are here: Where It Starts :|: Gopher Gassin' 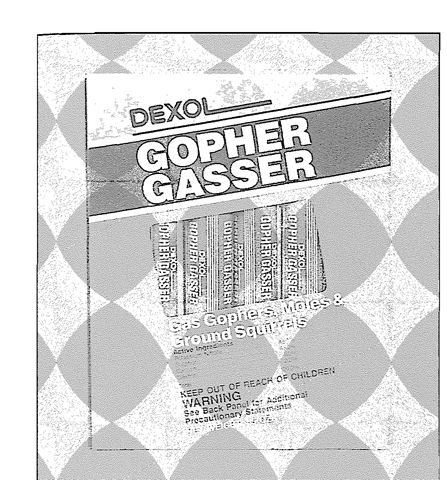 This is a song about love. A strange kind of love, undoubtedly, but that's the essential distillation of the title, if not the way it would eventually be recognized.

One college evening in January of 1990 my friend Ben Myers came back to the dorm with what looked like a stick of dynamite. It appeared to be made by a company called "Delox" and was used for injecting gas into gopher holes, an insidious form of rodenticide, useful for maintaining golf courses. It wasn't clear how he had obtained it, likely he found it lying around and just took it. My friend Don was there as well; he and I had begun to play music together and had already identified some aesthetic synergies. He had a distinctive lyrical bent so I suggested a song about these Delox Gopher Gassing sticks might be in order.

Now, looking for images on this topic, I'm discovering the "Dexol Gopher Gasser" which likely is what we were handling back then. We mangled it up and made it art.

This quickly dropped from my mind but a few weeks later Don brought me lyrics for the song that later became familiar to many as "Gopher Gassin'." I recall it being the first week of spring semester, perhaps a Tuesday night. My memory frames us sitting on the floor of our dorm hall, I with the Casio keyboard I had received for Christmas when I was 13, developing part of the melody to the verse. Generally I don't compose in front of others, so the balance of the song must have been developed in private or at least not under scrutiny, but I do recall singing the syncopated arpeggio of "there goes Friday, she's my girl" and Don voicing his approval. This began a fruitful collaboration that would span 3 bands, 3 years, 2 of my recitals and a number of songs that I treasure, including:

The titles are testament to Don's quirky genius. The lyrics that attend them will not disappoint. Some of my best songwriting (or lyric-setting) was called from the ether to give them extra-poetic life. I think Don liked how I would throw odd meters in to highlight the shape of the words -- for me the words shaped the music. I've always enjoyed working from preexisting lyrics, shocking them to life from the dead page like Dr Frankenstein. Having words to work with like "She cracks a smile like tumble dryers crack eggs" makes it that much more fun. Thanks, Don. Hopefully my love for the work he and I did together is represented by how many of those old songs became part of the repertoire of my NY band, Anomaly.

"Gopher Gassin'" was written as the band OCMR was coming together in the winter of 1990. Ironically it was a band that contained 2 of my closest college friends, but neither of them invited me to join. It was the 3rd member, Alisa Franklin, with whom I never became close, who brought me in. Knowing her only vaguely, I remember her coming into the lobby of my dorm a few times during winter term, talking about some flute player she was looking for. She wanted to invite that person into this "really weird" band she had started playing with. Separately my good friend Dan Kennedy a gifted composer, pianist, percussionist and all-around sweet-guy extraordinaire, was also telling me about this "weird band" he was playing with, but I am not sure I had connected these 2 ideas. Eventually, Alisa ran into me again and asked me if I knew any wind players. I told her I played clarinet, so she invited me to join them in rehearsal. I may have guessed that it was the band Dan had mentioned, but I am not sure I realized my dorm-neighbor Don Marvel was also in that band. He and I knew one another, but not well. Little did I suspect what an important friend and musical co-conspirator he would become.

I love how the lyrics start off like a million other songs - "There goes Friday, she's my girl, see Friday's got a new dress on" like something out of the '50s. Quickly we are diverted down a different path as the words continue: "She's got lace and pudding wrapped round her ankles, she's got prawns." This is not your mother's song about gophers.

I have a faint recollection of the early rehearsals being in a far-off abandoned lounge with a piano, in a dorm or something. It's funny, I guess no one was around because it was winter term. Eventually we started rehearsing at classrooms in the Oberlin Conservatory, which could be booked in the evenings and had pianos in them. The disadvantage was we had to schlep all our equipment to each rehearsal. For the first couple of months, Dan, playing the drums primarily for this group, was using a snare drum plus the drum case as a bass drum. In my mind, it was such a cool, lo-fi set-up that I was saddened when Dan told me how embarrassed and limited he felt to have to work that way. Eventually he got his drum set to school. I'm having a hard time imagining bringing the set to those classrooms though; it's possible he reserved it for gigs (maybe I can get Dan to chime in on this).

The band that would call itself OCMR likely was convened initially to play Alisa songs, which were very strong (and a couple of Dan's as well). Also they enjoyed improvising with the lights off in the rehearsal space. Later after I joined, we started working Don's and my songs into the mix. He and I had started playing our music for each other and it was easy to champion Don's loopy lyrics with their simple catchy tunes, and they were a blast to play. An important song he brought in, which would help define OCMR, was an old song of his called "Trout Big Fish". OCMR would do a long, wild arrangement of this with Alisa singing, Dan playing drums and melodica , Don playing piano and synth then later stepping forward in the middle to MC a bizarre "Fish Invocation" involving a friend juggling rubber fish while I played licks from the Rite of Spring and Schubert's "Trout" Quintet on clarinet. Especially in the early days I played primarily clarinet. As we added Don's and my songs I had more opportunities to play piano and keyboard.

"Gopher Gassin'" was conceived for OCMR: I heard all our voices, and handed out what I believed were appropriate sections for each vocalist. Don didn't consider himself a singer, so he had a shouted part, "Friday's got prawns on!" Alisa had the sweet, legato melodies like "have you ever walked on asphalt, like you're walking on kittens?" and the bridge, "She breathes deep[...]" (Don whispered this part with her). Dan had the main jumpy verse section. My parts were barreling interjections: "and it's obvious and crystal clear to me exactly what she's up to". Naturally we would all sing the chorus.

The following semester, my next college band, Mr Ability, would distribute the voices similarly, with many of the same characters. Alisa would be replaced by our friend, now famous writer & professor Thisbe Nissen, while Dan, Don and I would (mostly) retain our same parts. Another now-higher-educator, Jason Mittell, had joined us for this band. I handed over a couple of my barreling lines from the second half of the first and second verses to him to give everybody some skin in the game. OCMR was a tight quartet whereas Mr Ability became a giant shifting, sprawling Gong- or Family-Stone-like ensemble, incorporating at various points saxophone, trombone, cello and (always) violin in addition to the standard rock quartet, including the talents of now-established musicians like Carla Kihlstedt and Matt Hubbard. Naturally Anomaly had to have its take on this song, but we had only one vocalist. That's what you'll hear on the recording.

If you've been reading these musings, you'll know a little bit about Anomaly already. This was one of the songs we used when we were auditioning drummers to replace our sadly vanished British percussionist, Mike Caudle. The weird thing about "Gopher Gassin'" is how it changes feel from section to section, sometimes within a section. The chorus is rocking, but the syncopated verse stops and starts, and the bridge is like a folk song. These transitions are difficult to navigate, though one could breezily play 4/4 through most of it (except for the bar of 5/8: "Friday's got prawns on!" -- 1-2-3-4-5! -- hee hee). Brian, the eventual victor of these auditions, blew me away when he instinctively shifted into a reggae feel for the "She breathes deep" middle part. It was the best that section had ever felt; it was like it was making sense for the very first time, unlaboredly. I was so excited. This was the guy I wanted.

The other thing worth noting about the Anomaly arrangement is Matt's guitar parts. Since I was playing the chords to underscore my vocals, Matt sensed his job was to color things rhythmically and add melodic detail, highlighting bits of the melody or harmony. In the verse he plays hits and then plays a perfect reggae off-beat rhythm part in the bridge. Probably the part on the chorus is the best example of how Matt would add lead parts that enhanced the melody without conflicting.

In our later days I attempted to change the song up some by introducing a unison part for the bass and guitar to underscore the chorus. It was a bit reminiscent of Day Tripper, but worked well. Maybe I'll post a version of this eventually.

Finally, my daughter decided to perform this song in her 6th grade drama class a few years back. I made a karaoke backing track for her in GarageBand. I'm not sure exactly what her class thought of it, but Daddy was beaming.

There isn't a song of mine with a longer performance history than this one. That's the story of love.